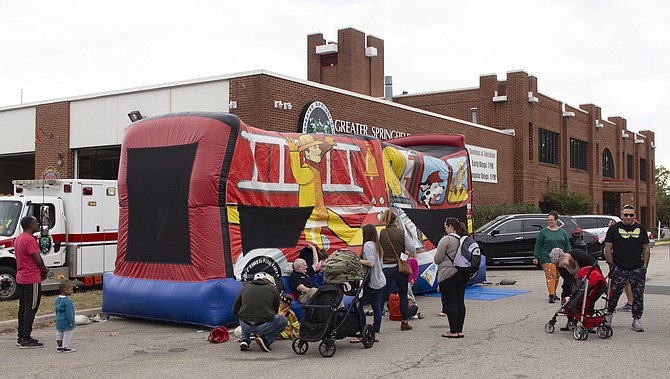 Children enjoy the bouncy house out in front of the fire station. Photo by Jennifer Albarracin/The Connection

On Saturday, Oct. 12, the Greater Springfield Fire Department kicked off their open house at 10 a.m., inviting the community – including children – to learn fire safety and more. The day was full of a bouncy house, teaching kids how to stop a fire, the exhibition of fire trucks, learning how to duck and roll, exposing kids to suited-up firemen, CPR safety, and so much more. The open house was part of National Fire Prevention Week, a nationwide event that occurs each year meant to educate the community on fire safety, especially the youth. This year’s theme is to teach the community multiple ways out of their house in case of a fire.

Chief Blake Payne, a 46-year-old firefighter, who has been volunteering for 26 years, elaborated on one activity they carried out to teach kids about fire safety, “We have a little station where kids come in, we pretend it’s their house, there’s a door and there’s a window and we tell them ‘oh, you can’t get out through the door because there is a fire. Where do you go?’ Most of the kids are like ‘The window?’ and we also make them climb through the window, we make them run out of the door, jump over a little box, jump through some cones, then we give them a little house and they can put out some fake fire we have set up. We have a wooden display. It has little wooden windows and they hit it with a water hose, and it knocks the windows down to put out the fire. The kids love it and hopefully it teaches them something.”

When asked what other methods are used to inform the greater Springfield area on fire safety other than those who dropped by this weekend, Payne added “We go to schools. We try to meet with most the grades where we try to talk about the same information. That gets the majority of the children.”

While the fact the Fire Station is run by volunteers stirs curiosity, Payne assured they are all well trained. “It’s probably be close to two years before you go through all the intro level training, then EMT training, the medical training, then you go to fire school. Fire school itself is six months long. It’s close to 600 hours of training just to become a firefighter.” Payne also says, “There’s no difference because the [call] system doesn’t recognize any difference between volunteer or career because we are all trained at the same level, the same standard because we do the same classes, we recertify the same way.”

Rocco Rousso, 38-years-old who has volunteered for four years, shares his empathy for those who he serves, “We visit people’s houses on their worst day, it’s nice to be able to make that a little better for them.” Though it can be difficult at times between a full-time job, volunteering and family for many firefighter volunteers, Payne, who also has the additional responsibility of teaching, shares that one of the best things about the job for him is the problem-solving: “People call for anything, we have to go there and figure it out.”